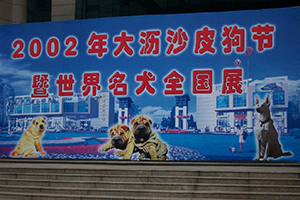 I recently had the great pleasure to travel to the Nanhai-Dailet region of China near Guangzhou (Canton) to attend the Nanhai-Dailet National Shar Pei Festival and All Breed Dog Show, visit with local traditional Shar Pei breeders and meet with Chinese veterinarians and research scientists.  Pat Pearce was also a guest of the Chinese government for the festival.   I had been Pat and George Pearce’s houseguest when the Midland Shar-Pei Club invited me to England to speak in April of 1996 and she asked me to write an update on Familial Shar-Pei Fever (FSF) and Amyloidosis for your newsletter when I returned home. 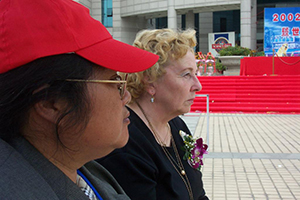 Familial Shar-Pei Fever is a hereditary episodic fever disorder similar to Familial Mediterranean Fever (FMF) and other hereditary periodic fever syndromes in humans.   These are inherited disorders characterized by self-limited episodes of fever with inflammation of joint or body cavity linings without any apparent infectious cause.   Shar-Pei with FSF have episodes of high fever (39.4-41.7 degrees C) lasting 24 to 36 hrs that may or may not be associated with joint or facial swelling, or abdominal pain.  Over half the patients experience swelling of the tibiotarsal or hock joint along with the fever and it is often referred to as “Swollen Hock Syndrome”.    Shar-Pei with FSF are at extremely high risk for developing systemic amyloidosis that can lead to premature death from kidney or liver failure but may live out relatively normal life spans with no evidence of amyloidosis on necropsy.

Since I last spoke at the Midland Shar-Pei Club in the spring of 1996, research has continued to try to identify the genetic mutation responsible for this disorder with the hope of developing a DNA test to identify affected individuals.   Efforts have focused on examining target areas of genes that have been shown to cause episodic fever disorders in humans.  Your donations to the CSPCA Charitable Trust and the AKC Health Foundation have helped to fund these studies.

Dr. Gary Johnson’s laboratory at the University of Missouri conducted the bulk of the work and Dr Daniel Kastner and his research associates did some studies at the National Institutes of Health.  Dr. Kastner’s group at the National Institute of Arthritis and Musculoskeletal and Skin Diseases at NIH was one of the two international groups that discovered the mutations in a protein causing FMF during the summer of 1997.   The canine equivalent of chromosome 16 where the FMF gene, designated MEFV, was found to be located was examined closely by Dr. Johnson’s group.  No mutations were located in this region in affected Shar-Pei.  In the spring of 1999, Dr. Kastner’s group published findings on the location of the mutations responsible for TRAPS or TNFR1-associated periodic syndromes that are dominantly inherited autoinflammatory fever disorders in humans.   These regions were also examined closely for mutations in Shar-Pei and again, none were found at these locations.  As each new human mutation is identified researchers are looking for a similar mutation on the canine equivalent gene.  There are still many human periodic fever disorders for which there is no known mutation as yet.

Phenotype is the appearance of an individual that is the result of the interaction of its genes and the environment.   Our efforts are hampered by the fact that we cannot look at a Shar-Pei and know with any certainty what its phenotype is with respect to FSF.    No one is able to say that Shar-Pei A has FSF and that Shar-Pei B is free of the disorder by looking at its history and appearance..  (I know – this is why we need a test!)  When the researchers examine Shar-Pei DNA, they are not certain that they are comparing normal Shar-Pei DNA to mutated abnormal DNA in the Shar-Pei with FSF.  This is because the syndrome is so widely spread throughout our entire gene pool that every dog is at risk.  Some individuals may never manifest a fever episode prior to succumbing to amyloidosis.  Others have their first episode in old age or the single episode they did experience was misdiagnosed as “teething stress” or an infection.  These dogs may be considered “normal” by their owners but be genetic carriers of the disease.   We can be relatively sure that some Shar-Pei are afflicted but declaring a dog normal and free of disease is impossible. 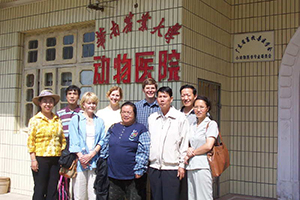 When I recently traveled to China, I discussed these problems with Chinese veterinarians and researchers.  We hope to use some genetic material from traditional Chinese Shar-Pei from China in an effort to identify unaffected normal Shar Pei.  Conversations with their scientists have also suggested some other promising avenues.    The research scientists we met in China have agreed to cooperate with Dr. Kastner’s group to pursue this and dialogue has begun to this end.

I am frustrated by the lack of progress but there is still much work going on and it will continue until we have more fully identified the cause of FSF and develop a test.   In humans however, it is still very much a clinical diagnosis (meaning diagnosis is made by the patient exhibiting most of the usual clinical features not by a specific test result) and many patients with FMF do not have an identifiable mutation (i.e. they test negative but have the disorder).  This is because a mutation causing the disorder can occur anywhere in the complicated biochemical pathway that causes fever and may not be the one tested for.   There is still no single simple test in humans.    I am still hopeful that all our affected Shar-Pei have inherited the same mutation because of the small pool of dogs from which they originally descended and that this mutation can be revealed. 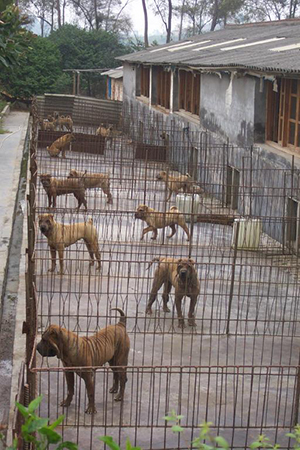 We are riding the wave of the current level of understanding of these autoinflammatory disorders.  As researchers learn more, new areas of exploration evolve.   Your support and cooperation is appreciated and necessary.   What can you as breeders do now?   Do not breed dogs with FSF or the offspring of dogs that have been diagnosed with amyloidosis.   Breed your healthy old dogs to healthy young bitches and vice versa; breed for longevity and good health.   Don’t put the blinders on… if it looks like an FSF episode, it probably is.  Educate your puppy buyers about the disorder and ask them to call you if they experience any problems – what you don’t know will hurt you.   Have routine blood chemistry tests and first morning urine sample urinalysis done on all Shar-Pei annually after 2 years of age and especially before any breeding to detect any latent kidney or liver problems.