I recieved my most treasured award in 1995: The Wm W. Morison Service Award "in recognition of (my) tireless research efforts and contributions to the future of the Chinese Shar-Pei".  There has been a major change to the award and I ask for your help. 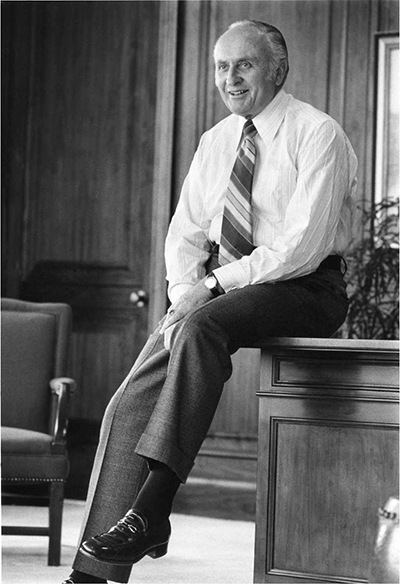 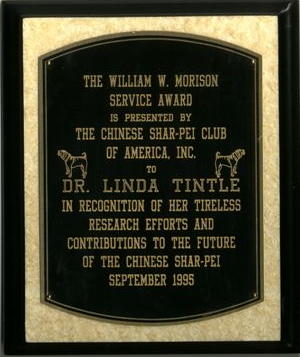 Dear Fellow CSPCA Members,
During a recent review of the awards sponsored by the CSPCA, there was general agreement that many current members are unaware of Mr. Morison’s contributions to the CSPCA and why the Service Award is given in his honor.  The William W. Morison Service Award is given specifically for dedicated, individual service to the CSPCA.  Current CSPCA members who are recipients of this award are: Dawn Walling; Jeff Vidt, DVM; Linda Tintle, DVM; JoAnn Leistner; Robert Hall; Cathi DiGiacomo; Jocelyn Barker; Lee and Romana Arnold.  Former CSPCA members who received the award are Bert and Ann Hickman.

In an effort to address the lack of knowledge about Mr. Morison and his significant contributions to the club and a recent major change to the award process by the then sitting CSPCA Board, which we consider ill advised, the recipients of this award provided the following information to our Barker Editor as a “Letter to the Editor”.  While the Barker Editor seemed willing to consider printing the letter we provided, she forwarded it to the CSPCA Board of Directors and we later received an email note from the club president describing that this communication as” negative and inflammatory”.   The club president stated that significant editing would be necessary and that she didn’t “want to rush this as there is no reason to do so”.   In short it was not accepted for publication. We believe that the CSPCA membership is capable of understanding the issues described below in our Letter to the Editor and that you are capable of making an informed decision.  We believe the information below is accurate, timely, and important and that we raise valid concerns.  Consequently we are mailing it directly to you for your consideration.   We believe that getting this information to members of the CSPCA will provide the opportunity for the membership to rescind an unnecessary and unwise alteration in the program before this year’s nomination process is completed.

Who was William W.  Morison and why do we need to know?

Although he was not among the original founders, Mr. Morison came to the CSPCA very early.  He was an early breeder of Chinese Shar-Pei, but very few will find his name as breeder on any pedigree no matter how far back you trace the lineage.   You won’t find his name as judge, exhibitor or show committee at many shows.   He served as Western Director on the Board of Directors in the early nineteen eighties.  So why is he important to us today?   Why would the Board of Directors establish the William W. Morison Service Award?

Many in America knew Mr. Morison from the pages of the Wall Street Journal; he was the Chairman and CEO of McKesson Corporation.  He led the first business delegation to China after Nixon’s trip opening the way to trade with China in 1973.  He served as the President of the John Muir Medical Center, President of the San Francisco Chamber of Commerce and the Bay Area United Way and served on the boards of many other charities and institutions.   For our purposes, his importance started when he acquired his first Chinese Shar-Pei, not like many of us from Hong Kong, but from the Peoples’ Republic of China.   His dogs were gifts, first to him and later to us.

Along with some charter and early members, including: Ernest and Madeleine Albright, Larry and Shirley Rafferty, Walter (Dugan) and Shirley Skinner, Victor and Dee Seas, Lois Alexander-Stadt, JoAnn Leistner, Verna and Emil Fahse, Jack and Bettye Small, Darlene Albright-Wright, Milton and Susan Tunzi, and Dawn and Bob Walling; Mr. Morison made the CSPCA happen.   The club today would not exist without the efforts of folks like Mr. Morison.  He served for many years as the CSPCA Registrar. His corporate office and secretary, Lois, were for many years the CSPCA office and staff.  The CSPCA studbook information you use today is directly dependent on Mr. Morison’s work.  In his corporate position he had knowledge of and access to many top professionals; he used that access to provide top-flight legal and financial guidance to the club.  He never used his positions of influence to benefit himself.  At one early point in the Shar-Pei world, two clubs existed, one on the east coast and one on the west coast. Mr. Morison was instrumental in bridging the gaps and bringing the two groups together to form the CSPCA, Inc.  Ultimately his stellar reputation for our accurate registry helped garner our recognition by the AKC in 1990.

After his death, the CSPCA Board of Directors determined that the club would create a prestigious award to be named in his honor and dedicated to his exemplary service to the CSPCA.  The Policy and Procedures Manual carried this description of the award:

William W. Morison Service Award:  The Chinese Shar-Pei Club of America, Inc. has established a Service Award (italics ours) to Honor William W. Morison who dedicated himself and his time to the betterment of the Chinese Shar-Pei and our National Club.  In his honor the CSPCA will recognize a national Club member(s) who has achieved the following:

The William W. Morison Service Award recipients extend our gratitude for the information on Mr. Morison and his part in the CSPCA to: Darlene Albright Wright, Madeline Albright, and Mr. Morison’s widow, Mrs. Jennifer Morison.  Thanks to Marge Calltharp for correcting the record on his Board term.  We also conducted research using the CSPCA PPM, minutes, the presidential synopsis of individual meetings and other documents.  Mrs. Morison generously provided the photograph used here with her permission.  If any members have corrections to the above information or are aware of other important information concerning Mr. Morison, which should be made part of our historical record, please contact one of the previous recipients of the award.

Now for the Rest of the Story
In November 2005, our then sitting Board of Directors changed the makeup of the committee to select the Morison Service Award winner from among the member nominated candidates, thereby, in our opinion, politicizing this award and altering its integrity.  This action was taken over the united objection of every previous recipient of the award who is still a CSPCA Member.  The Board determined (by a vote of six to six with the tie broken by the president) that future committees selecting Morison Award winners would be composed of three members of the Board and three previous recipients of the award. Remember, prior to this, only past recipients of the award were on the “selection” committee.

Members of the Board voting to uphold the tradition and unique nature of the William W.  Morison Service Award are: JoAnn Redditt, Secretary;  Mike Lauer, Eastern Director; Tim Bergeron, Central Director; Bob Rosenberger, Western Director; Beverly Wall, Director at Large; Grace Fritz, Director at Large.  We appreciate the support for the spirit and integrity of the William W. Morison Service Award given by these six members of the Board.

Again, this decision was made over the unanimous objections of every previous recipient of the award who is currently a CSPCA member.  The recipients clearly stated their objections in numerous communications with the Board, but these concerns were swept aside.   The recipients, all CSPCA members in good standing, were not invited to participate in discussion of this assault on the award.  Since we were not allowed to attend the discussion of the issues, we would like to share our concerns with you; the members of the CSPCA, that you might join us in requesting our Board to reconsider the recent action.

Please speak with your Directors and Officers, ask that they reconsider this action and return the William W. Morison Service Award to its original form for recognition of individual service to the CSPCA.

I would like to add that the award means a great deal to me.  It is our club's most prestigious award.  I don't believe it was in any way in need of fixing and I do feel personally insulted that the Board members who voted for this believe that we, the previous recipients, are incapable of selecting a deserving recipient from the nominees presented by the membership.  My first Shar-Pei were offspring of Mr. Morison's Tai-Lai of Tai-Lai, his import from mainland China and I feel I have followed his footsteps in bringing more original traditional dogs back here to the United States.  Here is a picture of a much younger "me" on a  very hot summer day at a rare breed dog show with Tai-Lai's daughter "ZL's China Pistol".

I am asking those of you who have contacted me over the years and visited this website to contact the CSPCA Board and ask for them to rescind the alterations to the integrity of this award. You can do this easily from the homepage of the www.cspca.com website where there is a link to "contact all of the CSPCA BOD".  Thank you very much!  Linda Tintle