I am pleased to accept the March 2010 invitation from the Shar-Pei Club of Great Britain to participate in their club as "Patron" to assist in the betterment of the breed.  See announcement below from their Secretary, Joy Bradley.

Patron to the SHAR PEI CLUB OF GREAT BRITAIN

“Patron” by definition is a “protector” and when the idea of the Shar Pei Club of Great Britain having a Patron as its figurehead was first voiced, the one name at the top of everyone’s list was Dr Linda Tintle DVM. It seemed only fitting that such a devotee of the breed should be offered this prestigious honour. The Club was looking to someone who not only owned and cherished the breed but also was in a position to help with the health issues that surround it. It was decided and Linda was contacted. To her credit, she said she would be delighted to accept the honour but not as a “silent figurehead”. If she were to take on the role, then she wanted to be kept abreast of everything that was going on in the UK and that she wanted to play an active roll in the breed’s future and development.

On Sunday 21 March 2010, at the AGM of the Shar Pei Club of Great Britain, the committee motioned the proposals – firstly, for the Club to have a Patron and if that motion was passed, a further proposal that Linda was named as such. I am delighted to say that both proposals were passed and Linda given a unanimous vote to be named as “Patron to the Shar Pei Club of Great Britain”.

We are delighted and look forward to working with Linda for the betterment of the breed. 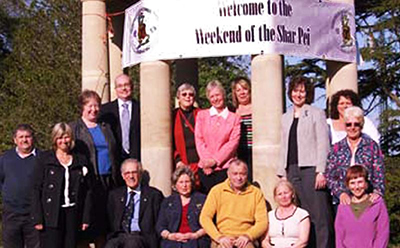