I went to mainland China in October 2002 as part of a delegation to the Nanhai-Dailet National Shar-Pei Festival and All Breed Dog Show in Guangdong province and conferred with some of their veterinary research scientists.   Their information suggests that the disorder we know as FSF was introduced to the breed when the "brushcoat" and heavily wrinkled "meatmouth" Shar-Pei were exported from Hong Kong in the late 1970s and early '80s. The original and traditional dogs from the Nanhai-Dailet region seemed to be free of the disorder at that time (but some were also subsequently contaminated by interbreeding with the brushcoat wrinkled Hong Kong dogs in the late 1980s and early 1990s.) They implied that the Hong Kong dogs had been interbred with Tang street dogs and Chow Chows, etc. to produce the "look" for which the American breeders/fanciers were clamoring.  Below are photos I took of a Tang street dog in Dali... it looks too much like a black brush American Shar-Pei to argue. 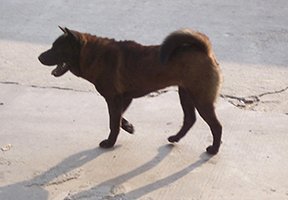 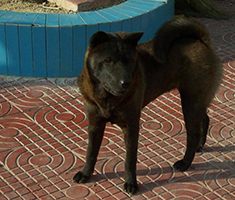 I know that I personally did not see the disorder until the brushcoats were becoming common here. (I was given a Shar-Pei puppy by a client in 1981... an example of the small things that change the course of your life.) The Chinese veterinarians claimed to have seen the fever disorder in Chows and other Asian breeds there which fits what I have seen - that Shar-Pei mixed breeds can have the fever disorder... but I've not yet seen any subsequent renal amyloidosis in the "mutts".  I have imported a few puppies from mainland China and I hope to discover whether they are carrying the mutation for the disease. 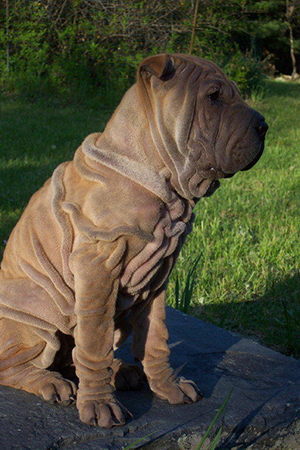 The Chinese breeders do not recognize a brushcoat as being a Shar-Pei.  The name "Shar-Pei" means sand skin and they told us that a long coated Shar-Pei was like a long legged Dachshund.  I saw no brushcoats there and 99% of the Shar-Pei were very short horsecoat fawns.   I saw two black dogs.   Entropion is common and not repaired.    I saw many "cherry eyes", a lot of eye damage and a few blind dogs.  Many of the dogs had the strong greasy odor often associated with the old style Shar-Pei.

Since that visit, I have come to think of the breed we know here in the west as "American Shar-Pei" relative to the traditional Shar-Pei.

I am not implying that only brushcoat dogs can have FSF... many horsecoat Shar-Pei dogs here are affected.   The information I was given suggests that the disorder first appeared at about the time the brushcoat dogs were first introduced the United States.

I would be interested in discussing this theory with any of the longtime Shar-Pei breeders and enthusiasts.

More info by Dr. Jeff Vidt in his website newsletters about his understanding of the history:
http://www.drjwv.com/newsletter/?view=5-1.php