Wrinkles = Shar-Pei. Wrinkles are the one characteristic that is universally associated with the breed. But why are Shar-Pei wrinkled?

Wrinkles = Hyaluronosis. Shar-Pei look wrinkled because they have abnormally large amounts of hyaluronan (HA), chiefly in their skin and bloodstream. Mucin, a clear sticky gel, is primarily hyaluronan.

For fellow biochemistry enthusiasts, HA is a repeating disaccharide composed of D-glucuronic acid and D-N-acteylglucosamine linked together by β-1,4 and β-1,3 glycosidic bonds. It is a beta-pleated non-sulfated glycosaminoglycan (GAG) formed by glucuronidation of N-acetyl-glucosamine.

Shar-Pei have significantly increased amounts of HA in their extracellular matrix, as well as increased HA in their blood serum (as much as 20 times normal). Shar-Pei are presumed to have a defect in the regulation of synthesis of HA.

The extracellular matrix (ECM) is the material in between cells that provides support, separation and anchorage to cells, protects against compression, and regulates intercellular communication as well as many other important functions including growth and wound healing. HA is a key component of the ECM.

Fibroblasts are the body’s “sculptor” cells. They are not fixed and can migrate through the ECM. They produce HA, collagen and the other components of the ECM. Inflammation stimulates them to reproduce and aids wound healing.

Fibroblasts use hyaluronan synthase to make HA. Hyaluronan synthases are membrane-bound enzymes which produce the GAG HA on the fibroblast cell surface and extrude it through the membrane into the extracellular space.

Hyaluronan can be an amorphous goo or it may form into cables. It can be in a “normal” native high molecular weight, very large molecule (HMW-HA) or it can be formed or degraded to low molecular weight fragments (LMW-HA). The higher the molecular weight, the more viscous it is. HA is the clay used by the sculpting fibroblasts.

Hyaluronan is important in the healthy kidney. HA is abundant in the renal medulla, but practically absent in the renal cortex. In the medulla, HA is expressed in the extracellular interstitium, not in the renal tubules. HA is vital to concentrating urine and retaining water prior to elimination from the body. The long HA chains form sticky compressible sponges that expand to occupy large volumes of water. These networks of HA bind cations like calcium and retain these important minerals within the body. HA also helps protect against dehydration by holding water inside the blood stream.

Shar-Pei are uniquely predisposed to medullary amyloidosis: in Shar-Pei with amyloidosis, amyloid is usually deposited first in this inner area of the kidney that is naturally rich in HA. Other dogs that develop reactive systemic amyloidosis due to massive infection, cancer or other severe chronic inflammation initially deposit amyloid in the outer renal cortex.

Hyaluronan is active in innate immunity and plays important roles including signaling “Danger” and assists in moving cells into damaged or infected tissues.

HMW-HA is sensed by receptors on epithelial cells, maintaining the integrity of the epithelium by preventing apoptosis or programmed cell death. Its healthy big HMW state is an “all is well” signal.

If LMW-HA fragments are generated, the balance shifts away from HMW-HA. LMW-HA is a “Danger” signal for receptors, resulting in inflammation.

HMW-HA protects tissues and allows for repair whereas LMW-HA provokes inflammation and causes injury. HA also facilitates the recruitment and movement of lymphocytes and neutrophils to the sites of inflammation.

In cutaneous mucinosis, HA is deposited in abnormally large amounts in the ECM. In some Shar-Pei, the quantities are so extreme that the HA forms lakes & vesicles in the skin with the appearance of “bubble” or packing wrap. Skin is thin and fragile.

LMW-HA (damaged HA fragments) induces the cytokine interleukin-6 (IL-6) while HMW-HA does not. IL-6 is one of the most important mediators of fever and the acute phase response by the liver.

LMW-HA activates pro-inflammatory cytokine production and IL-6 is secreted. IL-6 signals the liver to secrete the acute phase reactant proteins including Serum Amyloid P component and Serum Amyloid A (the ingredients for amyloidosis) that amplify the inflammatory response. Acute phase proteins lead to the production of enzymes that degrade the ECM, creating more LMW-HA and more IL-6 that further amplifies inflammation and contributes to chronicity. LMW-HA amplifies the damage from an inflammatory insult.

Shar-Pei with Shar-Pei Fever and Amyloidosis have been shown to have abnormally elevated levels of IL-6 even when without fever. This was published in a paper I co-authored with research scientists at Cornell University in 1992 and the results were recently duplicated and verified by Dr. Anne Avery at Colorado State University.

HA turns over rapidly in the body. HA is circulated through the lymphatic system to the lymph nodes and then to the liver. Receptors that bind HA line the lymphatics (LYVE-1 receptors). Damaged LMW-HA is pro-inflammatory. LMW-HA may be responsible for the lymphangitis syndrome that leads to lymphedema in some Shar-Pei causing extremely severe chronically swollen fluid-filled hocks. (See illustration below.)

Corticosteroids shut down the production of HA by hyaluronan synthase. 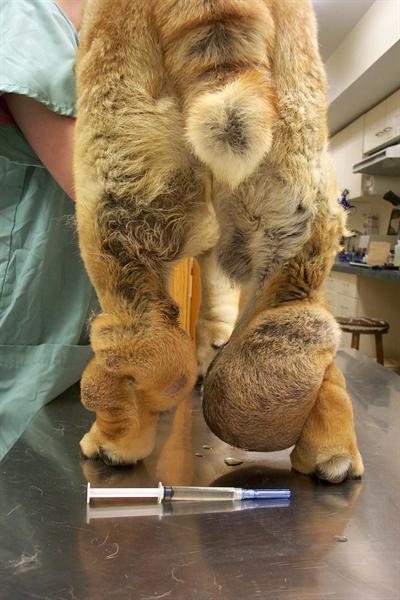 Fibroblasts stop producing HA when steroids are present. Stress triggers the release of steroids like cortisol into the bloodstream. Stress from illness including high fever can cause Shar-Pei to experience loss of wrinkling and shrunken muzzle. Steroidal medications can also stop HA production and shrink the face and wrinkles (prednisone, dexamethasone, hydrocortisone, etc.).

Large molecules of HA (HMW-HA) support health and are protective and healing. They hold water in the vascular space and protect against dehydration. HMW-HA blocks UVB damage and lubricates and cushions joints and other structures. It promotes cell growth and migration and is important in every organ and system of the body. HA is essential to normal function and reproduction. Hyaluronan synthases have also been associated with the increased production of HA that enhances the spread of malignant cancer cells.

Hyaluronosis has been reported as a rare mutation in humans and elevated serum HA levels have been identified in other breeds of dogs as well as some sheep breeds. By selecting for dogs with more wrinkling, thickened skin, larger heads and “meatmouths”, Shar-Pei breeders selected for increased hyaluronan. Unfortunately, HA has both good and bad effects. There are multiple reasons for Shar-Pei health disorders and damaged LMW-HA may act as one amplifier of inflammation.