FSF is an autoinflammatory disease characterized by dysregulation of the normal paths of inflammation.

Inheritance of FSF and Amyloidosis in Chinese Shar-Pei.

In people with "Phenotype II" FMF, signs of amyloidosis may precede outbreaks of fever or the patient may never experience or report any fever.

Amyloidosis is a killer.

How is FSF diagnosed?

I perform the following minimum database on patients with possible FSF and then at least annually thereafter:

I also routinely recommend these tests on all bitches prior to breeding and studs at least annually!  There are few worse horrors for a breeder than having the stress of pregnancy cause a bitch to go into kidney failure and die before the pups are a few weeks old and then having to raise a litter of orphan puppies which you know are carrying the gene for amyloidosis.

Recently, a few cases of severe pustular dermatosis with high fevers and vast sloughing of skin have been reported to or seen by Dr Jeff Vidt and I.  These seem to resemble the "flesh eating" Streptococcus infections reported in humans (although other bacteria have been cultured as well) and require aggressive antibiotic and supportive treatment.  These can be fatal even with treatment.  A recent reports suggest that this is an immune mediated vasculitis and steroids +/- azathioprine may be indicated.

I have seen most of my cases of this start with a “routine” FSF episode which for some unknown reason triggers the immune mediated vasculitis and sloughing.  Here is a photo of a very severe case that did survive despite lesions covering large portions of her body: 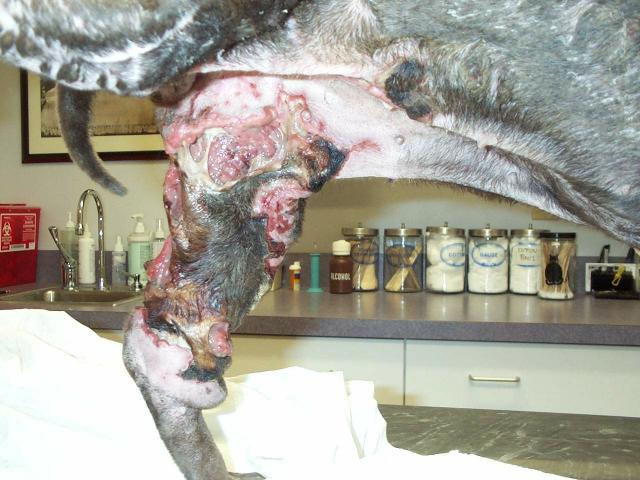 This is a very, very rare complication of an FSF episode.

Dogs on colchicine may continue to experience some fever episodes.  Some cease completely.  Others commonly report a decrease in severity and frequency.  Some owners report SHS without fever.  I believe the colchicine works in dogs as it does in people: the control of fevers and the blocking of amyloid deposition are by two different pathways and on-going fevers are not evidence of worsening amyloidosis.

There is no association between the number, frequency and severity of the episodes and the development or degree of amyloidosis.  A dog that experiences one single fever episode in his entire life is just as likely to get amyloidosis as the dog that gets them every 7-10 days.  Any fever episode typical of FSF should be considered a marker that the patient is at high risk for amyloidosis.  This is also why I do not recommend waiting to see if they ever get another episode before starting colchicine!

Most Common Signs of Advanced Amyloidosis.

How is Amyloidosis Treated?

Other causes of kidney failure in Shar-Pei (or... Why you need to get the biopsy/necropsy specimens).

You cannot assume that every Shar-Pei that died of kidney failure had amyloidosis.  It is, however, the overwhelming cause of premature death in the breed.