What is Amyloidosis?
A term for a collection of diseases that result in the abnormal deposition of beta-pleated amyloid protein throughout the body.  In animals, only reactive amyloidosis has been described and its precursor protein is serum amyloid A protein. It has been demonstrated conclusively that some Shar-Pei have an inherited form of amyloidosis. Amyloid AA composes the fibrils in the amyloid deposits in the body which stain brick red with Congo Red stain (CRS) (see Figure 2) and everything else pink.  When examined by a pathologist using a special microscope, they have a characteristic apple green color with birefringence under polarized light (see Figure 3). In severe cases, the amorphous pink amyloid substance may be obvious to the pathologist on microscopic exam even under normal stains without CRS (as in Figure 1) but submitted tissues cannot be said to be “negative for amyloidosis” unless the special stain is used. 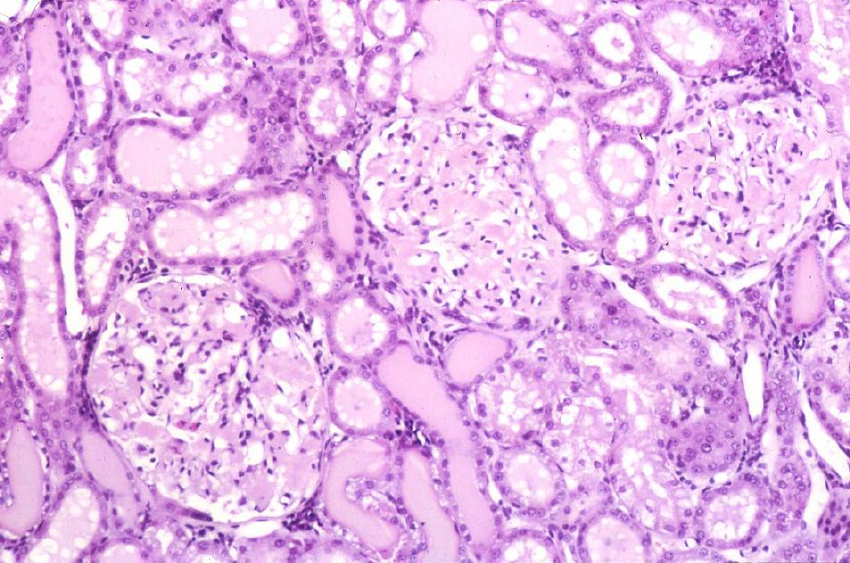 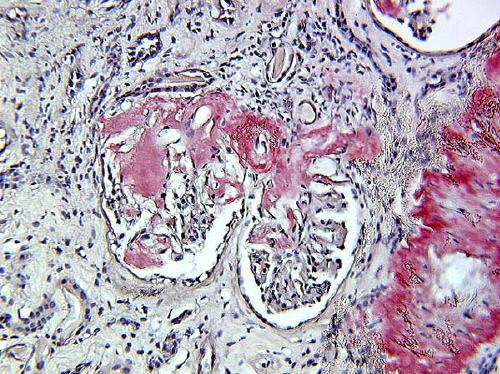 How is Amyloid Made?
Any time that inflammation occurs, certain chemicals are produced and released into the blood.  These chemicals of inflammation are called the Acute Phase Reactant Proteins (APP).  After the inflammation has gone away, the APP are broken down by the body and eliminated.  Dogs (or people) with amyloidosis can’t break these APP down into a form that can be excreted by the body and instead turn it into serum Amyloid AA and dump it outside the cells but still within the body.

Why does the Amyloid make them sick?
Amyloid is constantly deposited outside the cells.  It builds up like a garbage heap in an alley way until it starts to squeeze the adjacent cell walls.

The compressed cells can’t work properly.  The damage or disease that results depends on what kinds of body cells are most severely damaged or killed.

Kidneys can’t heal themselves by growing new kidney cells.  If a kidney cell dies, it is gone for good and can’t be replaced.  This is why the amyloid protein usually causes kidney failure first.

Why Does Familial Shar-Pei Fever predispose these dogs to Amyloidosis?
Dogs with FSF have chronically elevated levels of the chemicals that raise the levels of the APP – even when they are not having fevers.  If the dog’s body is overwhelmed by too much APP, amyloidosis occurs.

Why do some Shar-Pei with FSF get Amyloidosis and others do not?
We are speculating that it is probably due to variables in the degree of APP in the dog’s bloodstream - some dogs may have mild levels and others severely elevated amounts which may overwhelm their ability to eliminate them entirely.

FSF and Amyloidosis are closely linked and FSF is a huge risk factor for developing Amyloidosis.  However, not every Shar-Pei with recurrent fevers from FSF will develop Amyloidosis.  FSF does NOT always lead to early death from amyloidosis and some patients suffer recurrent fevers all their lives and are negative by CRS for amyloidosis at 12 yrs of age or older.  These dogs are the exception, not the rule.  These dogs may be carriers of mutations that cause chronic auto-inflammation and it has been observed repeatedly that if bred to another carrier, their offspring will often manifest with amyloidosis even though the parents lived relatively long healthy lives.  We will be looking closely at this in our studies with Drs. Avery and Kastner’s laboratories. Current research suggests that there are multiple interactive genetic mutations in these dogs that cause auto-inflammation and may predispose a Shar-Pei to amyloidosis.

Dogs carrying the underlying mutations causing chronic elevations in the APP do not always manifest a fever before presenting with signs of amyloidosis.   This is observed with the human periodic fever disorders as well.

I have seen FSF episodes but not amyloidosis (as of this date) in Shar-pei mixed breed dogs.